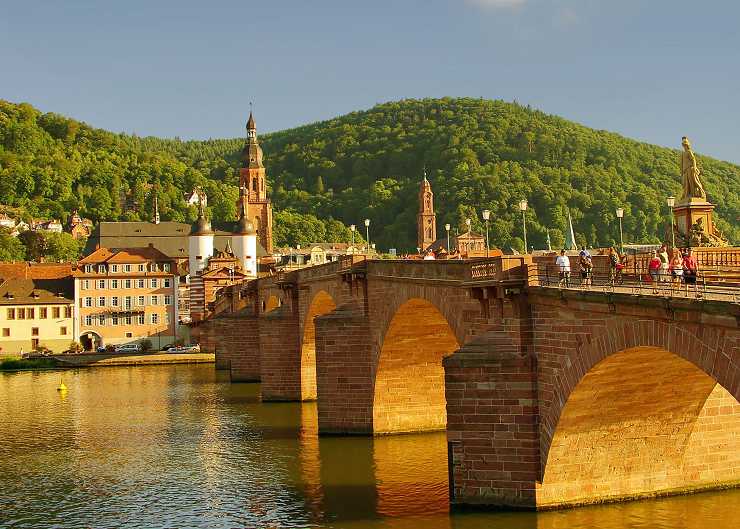 Take our city bus tour of Heidelberg to become acquainted with this venerable, beautifully situated university town and, as you drive along the Neckar, follow the evolution of this town from its historic centre with a view of the castle ruins to its modern research facilities of international repute.

Begin your city bus tour, for example, between the Old Town and the Neckar at Neckarsmünzplatz (Neckarsmünz Square), go around the imposing Karlstor (Karl’s Gate), and hear what’s so special about the hacking devil that gave the street “Am Hackteufel” (At the Hacking Devil) its name. Passing one of the best known landmarks of this town, the Alte Brücke (Old Bridge), our city bus tour brings you to the Marstall (Royal Stables). This is one of the very few buildings from the Middle Ages which survived the wars and fires that destroyed vast portions of the old town, remaining undamaged. Today, the Marstall is home to the university cafeteria behind its massive sandstone facade that is over 100m long.

After a drive through the historic university quarter, in which only the humanities faculties are housed today, you will meet with a special curiosity in front of the Print Media Academy with the S-Printing Horse, the world’s tallest freestanding statue of a horse.

While passing over the Ernst-Walz bridge during your bus tour, be sure to enjoy the unforgettable view of the Neckar valley, the Old Town, and the castle ruin towering above them, which already fascinated and inspired so many landscape painters and poets of the Romantic era. Go on to learn about Heidelberg’s modern research facilities in the Technology Park, including the university’s youngest institutes such as the Mathematicon, which was opened in 2015. This building’s architecture not only takes up the laws of mathematics that are taught and researched here, it also combines the university functions with offices, shops and restaurants in an innovative fashion.

Now the bus tour drives you through Neuenheimer Feld to the zoo on the north bank of the Neckar and the modern university hospitals, which are home to medical research centres of international rank and, among other things, set standards in cancer therapy and healing heart diseases. Today, Heidelberg University, formerly Ruperto Carola University, is one of Germany’s very best universities and is regarded as one of the 50 most reputable universities in the world.

After your City Bus Tour of Heidelberg, join a guided walking tour of Heidelberg or take a short stroll through the winding lanes of the Old Town, for example, from Neckarmünzplatz (Neckarmünz Square) to Marktplatz (Market Square) or to a pub of your choice. We would be glad to advise you with respect to distances and the time required for a subsequent walking tour. Just ask us!

At your request, we also offer bus transfers from other cities, such as Speyer, Schwetzingen, Mannheim and Weinheim, with a guide on board providing explanations and a subsequent short tour or the City Bus Tour in Heidelberg.

Changes can be made at no additional charge up to seven days before your guided tour of Heidelberg. If you wish to change the time and/or meeting place less than seven days before the tour, we will charge you 20.00 € for this change. Then, the time of day may only be changed by at most two hours (either way). In no case does the customer have a right to implementation of a change request.