Tour Through the Most Popular Castle Ruins in Germany 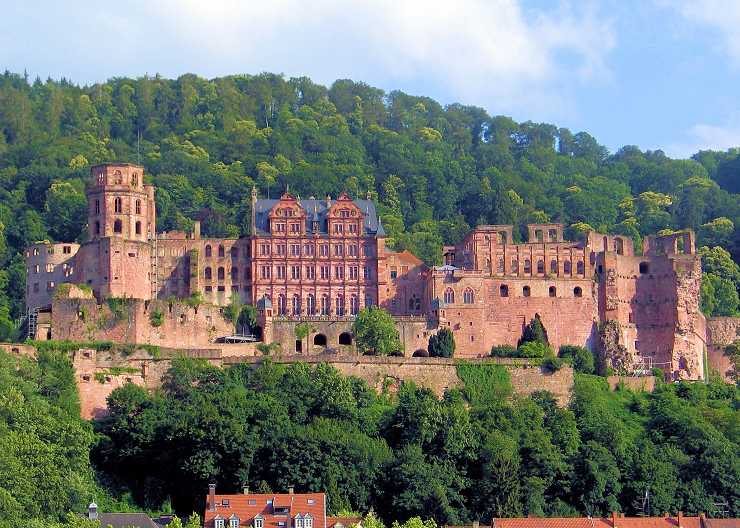 Take one of our Heidelberg Castle tours to experience the special flair of one of the best known ruins in the world! Built in the 13th century as the residence of the princes of Wittelsbach, Heidelberg Castle was the scene of great, historic happenings and sumptuous feasts. However, it first achieved world-wide fame several centures later, as a ruin. In the year 1689, and again in the year 1693, the once so proud castle was destroyed by soldiers of King Louis XIV during the Palatinate succession war, after which it was restored, but only in part. When, in the summer of 1764, a bolt of lightning struck the bell tower, setting the castle on fire, after which it was given up forever and, like Sleeping Beauty, fell into a very long sleep.

After even being used at times as a quarry for local construction projects at times, the ivy covered ruins towering over the Neckar valley below them were eventually rediscovered in the 19th century as a popular motif of romantic landscape paintings, such as those by William Turner. In 1779, the red sandstone ruins and their terraced Renaissance gardens had already inspired Johann Wolfgang von Goethe to draw and write poems during his stays in Heidelberg. In the years that followed, these drawings and poems attracted numerous authors to Heidelberg, authors who today are regarded as representatives of Heidelberg Romanticism, such as Achim von Armin, Clemens Brentano, Friedrich Hölterlin and Joseph von Eichendorff.

Today, the former Rittersaal (Knight’s Hall) of the castle’s oldest surviving palace, the Ruprecht Building (named after its builder King Ruprecht I), contains several models of the Palace which display the various phases of this impressive assemblage of buildings.

When at the Ludwig Building from the early 16th century, you can hear more about life at the court, for in addition to the living quarters of the builder, Ludwig V, there are also numerous utility buildings here such as the bakery, kitchen and tailor. Fortification systems like the well-fortified northern wall, the eastern moats, and the tower with thick walls show that the castle served as a fortress, while the magnificent Renaissance facades of the Ottheinrich Building, the Friedrich Building and the glass hall structure highlight the representative function of the ensemble. The restored Königssaal (King’s Hall) in the Ladies’ Building, which is now used by the City of Heidelberg for festive occasions, tells of great feasts, as does the huge barrel in the Barrel Building, which today, in the form of a wooden sculpture, is still guarded by Perkeo, the court fool, who was known for his tremendous ability to hold his drink.

Let yourself be enchanted by the special atmosphere of Heidelberg’s castle ruins, which continue to draw travellers from across the globe.

Evening Stroll Around the Castle (Outdoors)

Enjoy the picturesque ruins of Heidelberg Castle in the evening light and explore with us the castle’s garden and interior courtyard. Stroll with us through the richly decorated Elisabethentor (Elizabeth Gate) in the Stückgarten (Artillery Garden) and hear about the last meeting of the poet with his muse, Marianne von Willemer, at the Goethe commemorative stone. Learn more about the various construction phases and destructions of the castle, and hear how the prison tower “Seltenleer” (“rarely empty”) got its name and what was stored in the Cabbage Tower. We will also tell you about political moves, sumptuous feasts, and tragedies which took place behind the walls of the Ruprecht and English buildings and explain to you the sandstone figures on the facades of the Friedrich and Ottheinrich buildings, which are well worth seeing.

Standing on the Altan, the former princes’ balcony, you will enjoy the spectacular panorama view of the Neckar valley and Heidelberg at eventide. 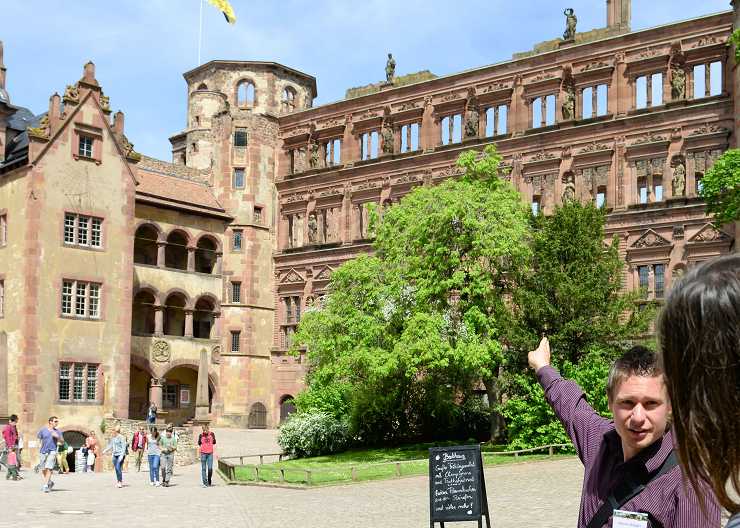 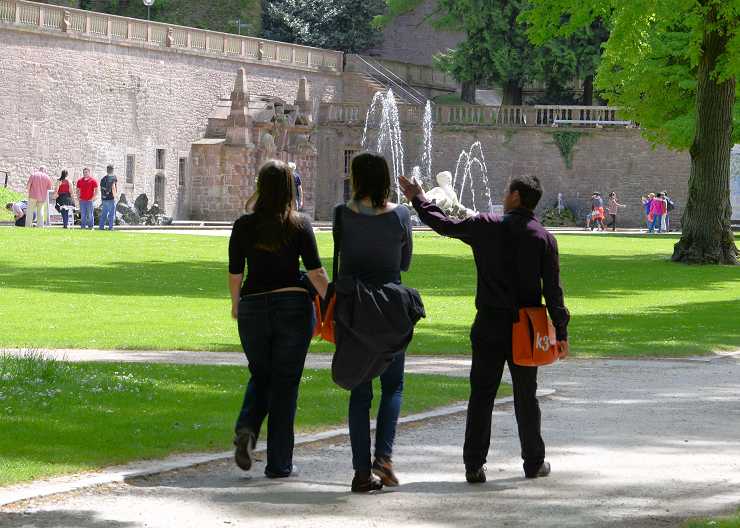 Explore the Garden of the Palatinate (Latin: Hortus Palatinus), which was celebrated by its contemporaries as the Eighth Wonder of the World. This garden was laid out on five artificial terraces in Renaissance style. Design elements that have survived and been restored, such as the Portal to the Great Grotto and the statue of “Father Rhein” resting in a water basin in front of it, still show why the work of the landscape architect Salomon de Caus was ranked among the most popular gardens in Europe in its time.

Walk in the footprints of Goethe, whose many stays in Heidelberg are commemorated by a stone in the Artillery Garden, and go to the Goethe-Marianne bench to hear about his muse, Marianne von Willemer, whom the poet immortalized not only in “West-östlicher Divan” in the figure of Suleika, but also by including three of her own poems in this work. If you take in the views of the town and the Neckar valley from the terraces, you will understand what fascinated and inspired Goethe and numerous poets who followed.

Changes can be made up to five days before your guided tour of Heidelberg Castle at no additional charge. If you wish to change the time and/or meeting place less than five days before the tour, we will charge you 20.00 € for this change. Then, the time of day may only be changed by at most two hours (either way).